Beware of criminal scammers pretending to call from Canopy.

Our President/CEO, Charlotte Nemec, sat down with the Journal of Business to talk about future plans for Spokane Federal Credit Union. We hope you enjoy the article! 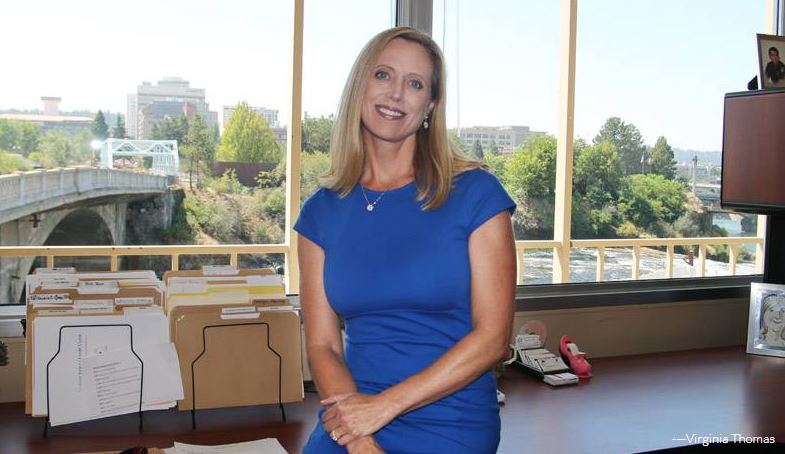 Charlotte Nemec has been president and CEO of Spokane Federal Credit Union for about a month and says she already has big plans for the financial cooperative.

Some of those plans include opening a new branch in Spokane Valley, increasing efforts to advance financial education among Spokane's low-income and young residents, and emphasizing the nonprofit's culture.

Nemec grew up on a cattle ranch near Havre, Mont. before briefly attending the University of Montana. She transferred to Eastern Washington University, where she received her bachelor's degree in economics. In 1995, she started working at Spokane Federal Credit Union as a human resources specialist.

Nemec says the credit union has about 11,300 members, down from about 11,600 at the end of 2016. She attributes the dip in membership to several factors.

"The competition in town is pretty steep in the credit union realm," Nemec says. "A lot of people...get a loan, you become a member just because you get a great rate on a loan, you might pay that loan off and then you drop off as a member. There's also, unfortunately, a lot of deceased, so we're losing a lot of our older members. And sometimes people go to another credit union, they keep their membership with us, keep a little amount in (their account), and then over time they just slowly fade away."

The trend in assets, however, is a different story: Nemec says Spokane Federal has $154.7 million in total assets as of Aug. 2, an increase of about 4 percent from late 2016.

"The other three were much smaller and just needed HR in general," Nemec says. "It was a super intriguing way to introduce myself to the credit union industry, because what I got to do was see four very distinctly different credit unions and how they worked, what their cultures were."

Nemec says it was Spokane Federal's culture that eventually convinced her to commit to working exclusively for that organization. As she became familiar with Spokane Federal, she decided to advance her knowledge by attending Credit Union National Association management school at Pomona College, in Claremont, Calif.

"I decided I wanted to learn more about the broad picture, because when you're in HR, you're hiring for every position in the building," she says. "And if you don't know what you're hiring for, it's really hard to find the right person."

Toward the end of her participation in the three-year education program, Nemec applied for and was promoted to vice president of administration. In June, she was named president and CEO. Nemec succeeded Susan Blain, who retired after 38 years with the credit union.

"I pinch myself a lot, like, 'Am I really sitting in this chair? Is this really happening to me?'" Nemec says.

Her experiences and connections with other Spokane-area credit unions have made her more confident about her new role, she says.

"All of the CEOs of the smaller credit unions, as well as the big ones, have reached out to me and said, 'If you ever need anything, I'm a phone call away,'" Nemec says. "It feels like a family. It is a very strong community."

Nemec soon will expand Spokane Federal's presence in the community with a new branch at 13105 E. Sprague in Spokane Valley, the site of former used car dealership Cars Northwest. The branch will be the credit union's first foray in Spokane Valley.

Renovations to the 3,600-square-foot building on the site are estimated to cost about $650,000. Nemec says Hissong Design Group LLC, of Spokane, is designing the project. A contractor hasn't been selected for the work yet, and the new branch is expected to open in May 2019.

"I am absolutely thrilled because our members have been asking about it for years," Nemec says. "We've just always kind of thought, 'Oh is that the best way to spend our members' money?" Because as a credit union member, you're the owner."

Hissong Design Group also will be involved in design for a remodel of the credit union's main office at 601 W. Mallon once the Valley branch is finished, Nemec says. She expects work on improvements there to begin around 2020.

Nemec says she's looking forward to translating her passion for financial education into programs and classes that will benefit the community, particularly young people and the working poor.

"I look to try to educate people that maybe have a banking relationship and maybe don't understand what a credit union is and the difference between a credit union and a bank," she says. "Because if you're not educated, how do you make a choice?"

"The purpose is to provide and expand economic opportunities in low-income and underserved communities, to be financial partners with other organizations that are serving that same demographic," Nemec says of the designation. "Our focus will really be on the working poor and really trying to educate them about why a credit union might be a better fit for them, especially if they're using things like payday lenders."

Nemec says her 21-year-old daughter, Olivia, has inspired her to work more closely with younger generations.

"She knows about credit unions because she's grown up here, but she says to me all the time, 'Mom, my friends have no clue the difference and why it would be a good thing for them, how it fits with our core values as a generation,'" Nemec says. "The working poor is a real thing, and I think younger people are really going to be challenged by that because expenses are so high. It's no wonder a lot of them have to live at home for a long period of time, between student-loan debt and rent."

Nemec says part of her plan to increase Spokane Federal's ability to serve low-income and young members is already in the works.

She adds, "We're going to be setting up a program to develop new services, new loan products, as well as new checking accounts, new savings accounts, those kinds of things that really emphasize the how-to, versus, 'Here's a loan,' or, 'No, you have bad credit or no credit so we're not going to pay attention to you.'"

Spokane Federal's tradition of engaging directly with members is another aspect of the organization that Nemec says she'd like to retain.

"If you want someone who actually recognizes you as a person and not just a member number or a customer number, or if you want to call on the phone and actually talk to a human being and not press a bunch of numbers, we still do that," Nemec says. "That direct communication is, I think, the best way to do it. And I think the Valley branch will help with that too, because then we have the opportunity to meet more people face-to-face."

In addition to its main office, Spokane Federal has a drive-up location at 930 N. Howard, and a branch at 1212 W. Francis.